Raising the Next Generation of Writers

Hey everyone! It’s been a busy summer with traveling, author events, writing workshops, and catching up with dear friends. I’ve also been prepping for my classes this fall! I hope to get a bit of writing done in July, but in the mean time, I’ve created a fundraiser to raise textbooks and resources for my middle school and high school English classrooms!

I have a Go Fund Me page where you can donate. These purchases will be checked out to students each year, so they will benefit many students over the years.

Students’ writing skills, understanding, and retention improve significantly when they have a student handbook  to learn from and reference. Short story collections  can be difficult to find and purchase. Literature guides  with reproducible handouts will free me up to spend my time giving students individual feedback rather than prepping handouts and worksheets.

For my middle school students, I will purchase Write on Course 20-20.
This is the updated/most recent version of Writers INC, a popular and useful writing handbook from the early 2000s that has been used and loved by students and homeschool families for decades. This newer version includes information on staying safe online and searching for information on the Internet. 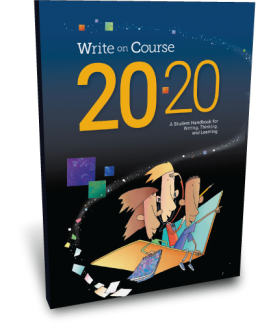 I will also purchase for the high schoolers the short story collection, Little Worlds, which emphasizes different aspects of literature, such as plot, theme, character, and irony.

I hope to raise enough funds to also purchase some resources, such as literature guides from Progeny Press or the book Brightest Heaven of Invention.

Recently, I have really been enjoying Cinema Therapy videos on YouTube. They are definitely for adults (some swearing and adult references), but they are pretty clean. They analyze movie characters from the perspective of a therapist. However, the two hosts are a therapist and a film maker, so they have some neat insights into film making, too. For example, in their video on Stardust, they mention how the montage is a storytelling device unique to film. You don’t know how many times I’ve paused in the middle of writing and wished I could just do a montage! 😆

I’ve appreciated the character insights. Now I want my (as yet, unpublished) book to be turned into a movie so they can analyze my characters because I’m really curious what they would say. 🙂

I am quite behind on my book reviews. Actually, I’m behind on everything. Since my diagnosis with ME, that’s pretty much become my life. But in the midst of everything I have to do in order to survive, it’s good to take a little time to myself when I can. So hopefully, I’ll catch up.

First up, Shadow and Sword by N. K. Carlson. I got an ARC of this book before it was released last spring, and I eagerly dove in. It started a little slow for me. I’m not sure what the reasoning was behind the choice of opening. It starts with the main character running away, and then shows in flashback the reason why he was running. As an editor, I would have recommended opening with the scene that causes him to run. I felt like I missed all the action. The first three chapters or so read like a travel log, so I would lose interest and put it down. It definitely felt like there was a lot of telling.

But here’s the thing–I don’t know if I would have noticed any of that as a teenager (and it’s YA, so teens are the target audience). I’m pretty sure as a teen, I would have devoured the story. And even if I hadn’t (it’s on the edge of what I liked as a teen), most of my teenage friends would have. I’m not as big on high fantasy myself, but for fans of Lord of the Rings, the Eragon series, and similar books, I think they would really enjoy it.

I found the villain strange. He was supposed to seem really intimidating, but he just seemed childish to me (not in a scary way), so I had a hard time believing him.

I confess that I haven’t finished the book yet due to life circumstances, so I can’t give a full review. My current opinion is that the writing could have been tightened up to make it fantastic, but that won’t stop avid fantasy readers from loving it.

I still have a month before the start of school to raise funds. Please continue your support. Again, just $80 will purchase enough handbooks for currently enrolled students who have to have them.

I’d still love to raise more than that so I can purchase the short story collection and literature resources. Please keep sharing!

This June, I had the opportunity to lead my first in-person story workshop for ages 8-13. I had a blast. All of the organizers were wonderful, and the venue was beautiful. I was a little nervous about leading a 4 1/2 hour workshop because of my health, but with my wheelchair, it went fine.

The kids were so creative and so much fun. At the end, we had a Q&A session, and I got asked questions like what’s my favorite color. I also had the help of a wonderful teacher friend, who had great ideas for how to organize things. I’m so excited for my next workshop! If you would like to host a workshop, either in-person or virtual, contact me! I also offer author events where I talk about being an author and kids can ask questions.

To respect privacy, I haven’t posted any pictures with people’s faces.

P.S. Don’t forget to spread the word about the fundraiser for my English classrooms this year!

I’m so excited tomorrow to go to the family picnic and new member meeting of the homeschool group I was a part of in high school. SHINE even sponsored a full-fledged graduation for me and the other seniors my last year of high school. We joked that we were a graduating class of eight valedictorians. 🙂

I’ll be sharing some about my journey from homeschool grad to published author. I’ll also be signing books and just talking with fellow homeschoolers. I hope to encourage some burgeoning authors.

The heat in Texas has been intense, so hopefully it won’t be as bad tomorrow. I’ll try to get some pictures to post, but I often wind up having so much fun I forget to pause and take them. 🙂

As promised, here are some pictures from the Houston Called-to-Teach Homeschool Convention!

I had such a good time. I got to talk with homeschool families. I got to talk about all the wonderful Chicken Scratch Books (I’ve read all of them now except the most recent release, but my copy is all queued up!). I got to encourage kids in their writing passion. I got to help make chicken bookmarks!

I talked lots with friend, editor, and publisher, Kiri Jorgensen (especially since our flight was delayed around seven hours . . .). It was so encouraging and fun. I hadn’t gotten to talk shop in quite awhile. And then I got to know Kelli McKinney. Her middle grade novel from Chicken Scratch Books comes out in October. It sounds like so much fun, and I can’t wait to read it.

I also met some other authors who had booths at the event and learned about different curricula options. Our booth was next-door to Right Start Math, about which I’ve heard wonderful things.

I also signed lots of books, which has been one of my dreams. A signed book from the author can be so special. I’m so happy I can give that specialness to so many kids.

A Word about Patriotism

We take this break from our regularly scheduled programming to share a word about patriotism.

I’ve been learning a lot more about American history lately–focused on US history, but I’m trying to learn more Canadian history, too. I know sadly little about Canada, and it’s our next-door neighbor! One of the things I’ve really appreciated is coming to terms with the fact that I can recognize the wicked things my country has done, call them out, repent of them, and still love my country. Loving my country doesn’t mean loving everything we’ve done.

What loving my country means is that I won’t give up on it and I will always do my part to make things better. I can also enjoy some of the fun traditions while letting go of hurtful or harmful ones.

So on this 4th of July weekend, I hope you will find a balance. That you can enjoy being patriotic and singing about the things the US tries to stand for (I admit, it has often failed!), but that you can avoid glossing over the wicked things the country has done and recognize the people who are hurting from long-standing wounds.

May the US turn its heart to God so that God can “crown thy good with brotherhood from sea to shining sea.”

Hey everyone! This weekend, I’ll be at the Called to Teach Homeschool Convention in Houston, Texas. If you are in the area, stop by the Chicken Scratch Books booth to say hi. I’d love to meet you and sign a copy of Best Friends Playbook for you!

You’ll also have the chance to meet my amazing editor, Kiri, and to learn about other wonderful Chicken Scratch Books books (I’ve really enjoyed every single one I’ve read) as well as the novel study courses offered for each book (including mine!).

I hope to meet some of you in person soon!

Over the last couple of weeks, I’ve been doing lots of prep work for the classes I’ll teach this fall. In my downtown, though, I’ve been enjoying Batman. The 1960s version. I’m learning a lot about myself as I watch. 🙂

I have fond memories of watching Batman with my sister when we’d visit our grandmother. I had to have been pretty young. I remember one episode in particular where Robin was tied upside-down to the clapper of a bell that would kill him when it struck (I was so tense, but it was so exciting!), and another with a giant book in the middle of the street (turns out they were the same episode). I also remember getting really excited if Catwoman or Batgirl was in the episode.

I had previously traced my love of heroes-in-jeopardy to reading Hardy Boys mysteries in junior high, but now I’m thinking it goes even farther back to Batman. This could explain why my characters would always get trapped in near-death situations (and always escape miraculously . . .). My characters frequently in ridiculous situations, like being suspended from the ceiling over pits of lava or tanks of sharks, etc.

I’m also understanding better why my sense of fighting and injuries was so unrealistic. (I believe I’ve mentioned how my husband once said to me, “Your characters recover awfully fast” and that was after I’d worked to make battles more realistic, ha!) If I’m basing my ideas of injuries and fights on Batman and Power Rangers, that explains a lot.

But I’m also suddenly understanding my deep love for superheroes. Superheroes are just about my favorite things (I love a good quest, too). However, I’ve always felt confused by that because I often haven’t liked superhero shows or comics. In junior high, I didn’t really like to watch X-men or Spiderman because they were sad. Everybody hated the heroes. I didn’t like to watch Batman because it was so dark (and creepy). The few times I read comics, they were too serious.

Well if I was expecting biff, bam, sock, and it’s morphin time, that would explain things!

And now I really want to go write a cheesy but fun superhero story. 🙂

What sorts of things have inspired you?

Subscribe to my newsletter to get insider book info, writing tips, and blog updates (you can choose if you want the reader newsletter, the writer newsletter, or both!).